“ What art can teach,

what human voice can reach the sacred organ’s praise?”

On the evening of February 23, 1915, the new three manual pipe organ at Penge Congregational Church was dedicated to the service and the glory of God.  The service of dedication was followed by a recital given by Walter W Hedgcock, the Organist of the Crystal Palace.  The recital included Handel’s aria on Dryden’s ode to St Cecilia (quoted above).

Our organ, built by Lewis and Company of Brixton, has for a whole century inspired our church’s praise and made itself heard in thanksgiving to the Lord.  It has played a vibrant role in the celebratory events of the church, and has been valued throug 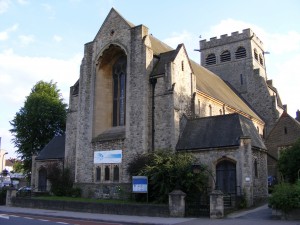 hout its history by organists, congregations, and the audiences for public concerts.  From the earliest years of the church a rich musical tradition developed, and a large choir was sustained for many years.  The 50th anniversary of the church featured a week-long series of organ recitals, and the 100th anniversary was marked by the production of a CD of organ music.  The organ’s own centenary is being celebrated in recitals by the Southwark and South London Society of Organists (February), and by the Bromley and Croydon Organists’ Association (April).  A third recital will be given in June as part of Penge Festival. Click the photo (or here) to hear some music – details of the organ are at:

Penge Congregational Church is non-conformist in the Congregational tradition of the independence of each local fellowship, and acknowledging Jesus Christ alone as head of the Church.  It was founded in 1908, and the present building, designed by P Morley Horder, was completed between May and October 1912.

However, while the principles on which the church was founded were, and remain, Congregational, the building commissioned by the founders is by no means typical of Free Church architecture: the building is cruciform, with a barrel-vaulted oak ceiling and a lofty chancel.  The chancel contains low-reliefs of Moses and Elijah; stained glass windows depicting Christ in glory flanked by St Peter and St Paul; and a panelled ceiling painted with angel-musicians.  The organ case, with frontages on both sides of the chancel, and both pulpit and reading desk are made of ornately carved oak.   The marble font is carved with waves and scallop shells, and above it is a woven silk hanging presented to the church to mark its 95th anniversary.  Other details of the decoration of the building include emblems of the four evangelists, and stained glass illustrating the Parable of the Sower and a depiction of St Cecilia.

Part of the community

The church, from its beginnings, has been very involved with community concerns, and our halls provide accommodation for public meetings as well as mothers-and-babies groups, the AA, a dance school, the rehearsals of a ladies’ choir, and martial arts lessons.  There has been a Scout group connected with our church since 1910, and we are grateful to the men and women who have devoted themselves over many years to the activities of Guides, Cubs, and Brownies.  The church is associated with Churches Together in Beckenham, and recently was host to the local service for Women’s World Day of Prayer.  A lunch club for the elderly meets weekly, and our transept has become a store for a local food bank.  During the past decade the SE20art group has held annual exhibitions in the Kenilworth Hall, and on occasion filled the church itself with paintings and drawings.

I am Andrew Chadney and am the organist of the church of St Stephen, Norbury with Thornton Heath was built in 1909. The chancel was added in 1914. St Stephen’s is an Anglican Church in the modern Catholic tradition. We are a friendly congregation drawn mainly from the local community and reflecting the rich diversity of this part of London.

We aim to be an inclusive church welcoming everyone, whatever their age, background, sexuality or relationship status and regardless of how much or how little faith they may have. Honest doubters and people with questions are positively welcomed! 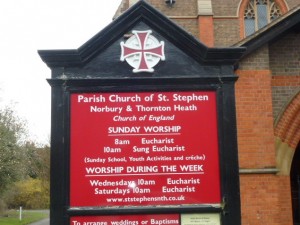 Although there is no robed choir we have for many years managed to assemble a good-sized body of singers to sing at Christmas and Easter services. More recently we have extended that to include leading the congregation on the first Sunday of most months.

The congregation sings well and we currently use the Dom Gregory sung service.

The organ is a 2m/p instrument by Brindley and Foster (a third manual was prepared for but the instrument was considered so effective that the choir manual was never added) and was installed high up on the north wall of the chancel and was dedicated in May 1914. A trumpet was added to the Great organ in memory of a young man killed in 1917. Two more stops were added circa 1965 by JW Walker. Click on the photo (or here)  to hear me play the Postlude in D by Stanford.

My name is John Mitchell and I am the organist and choirmaster of All Saints’ Church in Warlingham, a little Saxon building dating from c 1250. We are in the liberal anglo-catholic tradition, part of a team ministry of four churches, seeking to combine good Liturgy with a friendly welcoming atmosphere. Our small but dedicated choir sings an anthem every week, with BCP Choral Evensong on the first Sunday, and a Family Eucharist on second Sundays when we try to let our hair down slightly. We cast our musical nets widely, encompassing many periods and styles, from plainsong to Rutter, Tallis to Kendrick.

This video gives a short introduction to the music and history of the church at Warlingham. Details of the current  Wm Hill organ can be found at http://www.npor.org.uk/NPORView.html?RI=E00526

Click on the photo to have a short video tour of the building, history and music of All Saints which I recently made. 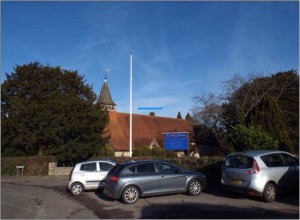 Other Let the Music Sound

I am Martin Callingham and my church is St Paul’s Furzedown (Tooting – though it is referred to in the Organ Register as being in Streatham) which was opened in 1926. The church’s  details are here:

The church is now part of a Team Ministry with two other church of quite different worship styles. The three churches work very well together and equally closely with the Mitcham Lane Baptist Church. There is a good interaction with the  local community.

The churches combine to run, among other things, a long established Youth Club, a Holiday at Home week and provide a Christmas lunch for those who would prefer not to eat alone.

St Paul’s, in particular, runs one of the Wandsworth Food Banks with church and community volunteers and over the year it runs a variety of events primarily to serve the community and hopefully bring some into the church. These include: a back to school party for primary school age children in August, a Flower Festival in the Summer and a Summer Concert,  Passion music concert before Easter (this years being a performance of Stainer’s Crucifixion) and a variety of fairs.

The congregation comprises a large proportion of first generation immigrants from the Caribbean and West Africa who are attracted to the traditional Anglican service – and are good singers!

I generally start playing about 5 minutes before the procession enters, across communion and, of course, at the end of the service.

I try to fill in with organ ‘noises’ when there is a gap with some extemporisation though it is more like doodling – I see my role very much as providing the oil of the service.

We have a small group who sing in parts as a choir and also perform appropriate music across communion. In addition, we have a professional cellist, who occasionally plays for the service, and I sometimes play the piano across communion to provide a change.

The organ has two manuals and was originally from 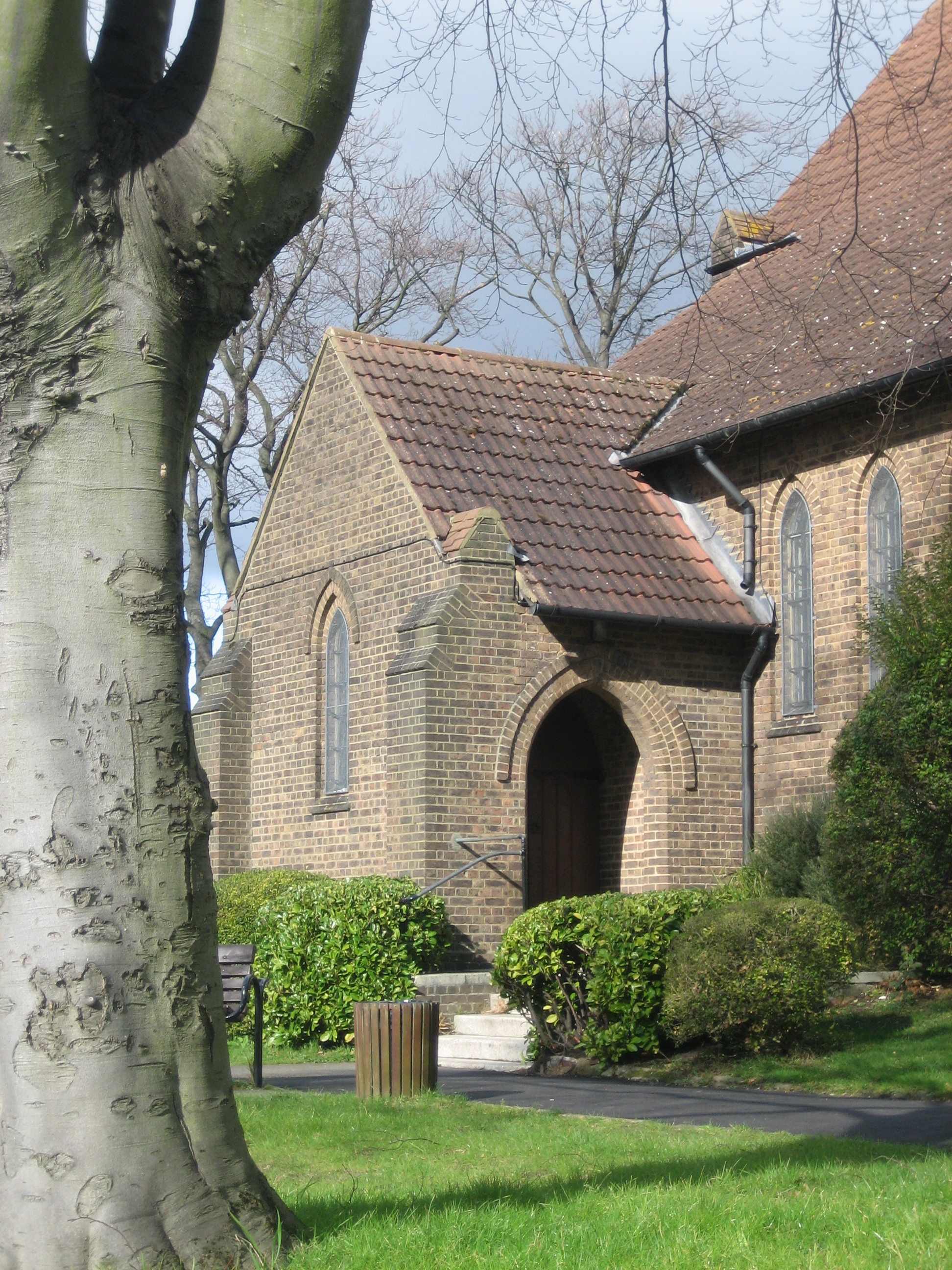 Kingston Parish Church and I think built by Willis.

See some photos of the church and its surroundings and you can hear me playing the one of the ‘Communions’ by Theodore Dubois by clicking the photo or here.

Details of the organ are: http://www.npor.org.uk/NPORView.html?RI=R00303

The organ suffered water damage mainly to the pedal pipes which has just been repaired and the the Great pipes cleaned. The organ sounds surprisingly good and is loud enough to to handle a congregation of over 450 which we occasionally get for funerals: by virtue of the demographics of the congregations we get more funerals than weddings, though more recently we have had a reasonable numbers of Baptisms. Normally the congregation numbers about 40, but they are good singers and are very appreciative of the music.