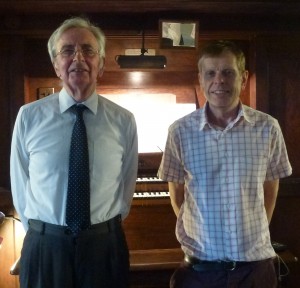 I am Chris Caine, Organist and choirmaster here at St Clement with St Peter Church with John King our Emeritus organist. Click on the picture of John and me to hear a little more about the church, or click on this link. The United Church of Clement with St Peter’s, Dulwich and was established in November 1986. There had previously been two separate parishes. The parish of St Peter’s was founded in 1865 and it initially used temporary buildings until a dedicated church was finally built in 1874. The parish of St Clement began life as a mission church in Hindmans Road. It became a separate parish in 1883 and by 1885 a large new church had been built on Friern Road and a vicar was appointed. It was destroyed by bomb damage in 1940 and the new church was subsequently consecrated in September 1957. Worship at Church of Clement with St Peter’s, Dulwich is in the anglo-catholic tradition. It is an inclusive church with regular sung services each Sunday morning at 10.00am and said services on Thursday mornings at the same time. Services consist of parish communion with Sunday School and once a month there is a shorter All Age Worship service. There is a small but flourishing choir to support the worship of the parish with hymn and psalm singing and regular anthems.

The original 3 manual organ of St Clement’s Church (as it was at the time and now St Clement with St Peter) was by Normal Beard. It survived the bomb damaged suffered by the church in 1940 and was stored in the church hall during the remaining war years. The church was re-built after the war but the new build did not allow sufficient space for the organ to be re-instated. It was therefore sold and its current whereabouts are not known. 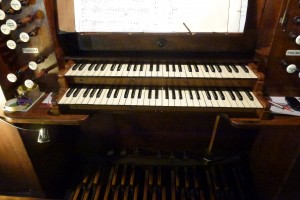 It was replaced with a small, far from new two manual instrument by Henry Jones which was installed in the West Gallery. It was deemed to be just adequate for the liturgical needs of the church but its incomplete pedal compass and meagre range of speaking stops imposed severe limitations upon serious organ playing. Some of the shortcomings were rectified by work carried out by Vincent Coggin in the early 1990s but a few years later the opportunity arose to secure a superior instrument from a redundant church – St George’s Battersea. The former organ was eventually installed in choir auditorium of the Russian Musical Academy at St. Petersburg in 1996. This instrument was built by J. W. Walker & Sons in 1897 and incorporated the pipework from the company’s earlier instrument of 1837. It was installed in St Peter’s for first use on Ascension Day 1995 with an additional clarinet stop obtained from St George’s Perry Hill Forest Hill. Some of the pipework is of interest. It includes 16 of the original 21 gilded case pipes, which though still in use, are not visible. The Swell Gamba is a Bell Gamba stop, a tapered body with flared tops originally with ear tuning. Click here  to download the specification. 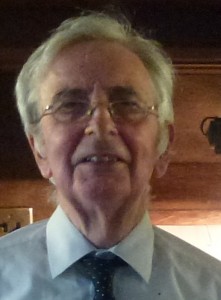 Click on the photograph of John to hear him playing the Fantasia in F minor by Mozart, or click on this link.